Thank to all who jumped in and made short work of our clean up.

Bernie Knott
John and Tori Dean
Gary Weyant
Rick Coenen
John Walter Croslands
Also thanks to Pat Lemmers for getting the tree company out for the big limbs.

Progress on the Jetty

Eagles in the River

Thank you to all who donated to the 2020 Fish Fund:

Our Klaus family’s history with North Lake began in the 1940s when John Porter and Doris Westfall, who were high school sweethearts in Nebraska City, attended dances at the lake’s dance hall.  Little did they know that 30 years later they would become residents of North Lake.

It was the spring of 1972 when John, Doris, Carol and Jim Porter were visiting Dr. Elmer and Lorraine Penner at cabin #38.  John was a surgeon in Beatrice and needed a place to get away from his very hectic schedule.  Elmer told John about lot #13 being for sale but there was no cabin there as it had just burned down.  It was love at first sight and it began our 48-year history living at North Lake.

The summer of ‘72 was filled with skiing, sleeping on the deck under the stars and riding on a large tractor tire inner tube being pulled by our boat.  North Lake became the location of choice for family get-togethers, both large and small.  There were many Fourth of Julys spent at the lake with extended family members coming from as far as Colorado, Ohio and Michigan to celebrate.

Over the years John kept Alan Johnson who lived in cabin #23 busy utilizing his carpentry skills, and a fast and long-term friendship between the two developed.  John was notorious for finding used or surplus house items (windows or the front doors from the closing Montgomery Wards store in Beatrice) and asking Alan to incorporate them into some addition to the cabin.  John and Doris also developed a lifelong friendship with neighbors Dale and Eileen Engelkingin cabin #14.

In 1976, Carol was offered her first teaching position at the one-room school house in South Bend, but opted to teach in Ashland instead.  While missing that opportunity to live at the lake, Dan and Carol lived there a few times off and on throughout the years.   Jim Porter resided year-round at the lake while he attended his first year at Creighton Dental School in the early 1980’s.  At that time, there were very few year-round residents.  Dan and Carol’s daughter, Kristin, lived there twice during her mid to late 20s.  We apologize once again to our neighbors for the parties she held without our knowledge.

Dan and Carol’s children, Christopher and Kristin, and Jim and Leslie’s children, Becky, D.J., Michael and Matthew, grew up at the lake spending many summers on the water learning to water ski and wakeboard.  In 2019, we introduced the fourth generation of our family to North Lake when our one-year old grandson from Rhode Island, Benny, came for a visit.  We hope we can provide Benny the same wonderful memories at the lake that Mom and Dad gave us.

Dan and Carol inherited the cabin after John passed away in 2010 and Doris passed away in 2015.  After Doris’ memorial service, the family gathered at the lake to honor both John and Doris because the cabin was the place that brought our family together and gave us so many treasured memories.  In 2016, we said good-bye to the original cabin and tore it down.   During the construction of the new lake house, family members wrote memories and messages on the unfinished walls and floors to John, Doris, and Jim (who passed away in 2014).

Thank you to all of the residents at North Lake that make it such a special place.

Please connect with Bruce Skinner if your property is pictured here.

1) Drive Slow – all vehicles and ATV’s,  Anyone walking has the right of way.

2) Dogs must be on a leash when off your property.

3) Pontoons – stay to the outside of the lake during fast boating hours.

4) Swimmers/kayaks/paddle boards – cannot be further than 25 feet from shore.

5) Speed boats – no weaving back and forth if others are skiing or tubing.

6) Be courteous to your neighbors.

7) Children under the age of 13 on boats MUST be wearing a life jacket (per Nebraska State Law).

8) Golf carts and ATV’s must have lights after dark.

9) Take a break and give other boaters a chance.

10) You are responsible for your guests and your guest’s awareness of the rules.

11) Everything must have your cabin number posted on it.  Boats/kayaks/ATV’s/golf carts.

12) No fast boating after dark.

13) Pontoon safety lights need to be turned on at dusk.

Have Fun and STAY SAFE.

North Lake now has an easy way to donate to the fish fund, 4th of July festivities, or any other donation.  We now have a Venmo account.  If you have questions what Venmo is, feel free to visit their website.  https://venmo.com/about/product/   Before you donate, you will need to create your own Venmo account.  It is fairly easy and doesn’t take much time.  All the information is on the website.

North Lake’s Venmo name is:  North-Lake.  (be sure to have the dash between North and Lake). Dale will be the person in charge of the accounting of the funds, so you will see his name associated with the account.  When sending money to the account, Venmo makes you put a comment which is great.  Please have your comment be whatever account/activity you are donating to.  For example, if you are donating to the Stock the Lake fund, put “Stock the Lake” in the comments.  This will help Dale keep all money allocated to the correct fund.  Also, the profile picture for the Venmo account is a sunset picture at the lake.

Thank you and happy donating!

Jeff McCabe took slide images from a media project he did in 1972 and produced a modern digital short video with music. This video has images of what is now Middle Island 100 feet deep in sand dunes. Pictured are images of the old quarry lake with the meadows and limestone formations of what is now Quarry Oaks Golf Course. This video shows a landscape and features that are gone forever. 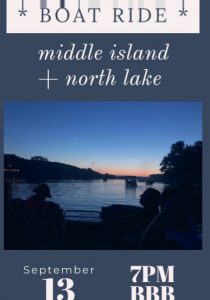